Wanda Sykes was born in Portsmouth, Virginia.[3] Her family moved to Maryland when she was in third grade.[4] Her mother, Marion Louise (née Peoples), worked as a banker, and her father, Harry Ellsworth Sykes, was a U.S. Army colonel employed at the Pentagon.[5]

Sykes’ family history was researched for an episode of the 2012 PBS genealogy program Finding Your Roots With Henry Louis Gates Jr. Her ancestry was traced back to a 1683 court case involving her paternal ninth great-grandmother Elizabeth Banks, a free white woman and indentured servant, who gave birth to a biracial child, Mary Banks, fathered by a slave, who inherited her mother’s free status. According to historian Ira Berlin, a specialist in the history of American slavery, the Sykes family history is “the only such case that I know of in which it is possible to trace a black family rooted in freedom from the late 17th century to the present.”[6]

Sykes attended Arundel High School[7] in Gambrills, Maryland, and went on to graduate from Hampton University,[7] where she earned a Bachelor of Science degree in marketing[3] and became a member of Alpha Kappa Alpha. After college, her first job was as a contracting specialist at the National Security Agency,[7][8] where she worked for five years.[9]

Not completely satisfied with her role with the National Security Agency (NSA), Sykes began her stand-up career at a Coors Light Super Talent Showcase in Washington, DC, where she performed for the first time in front of a live audience in 1987.[9]

She continued to hone her talents at local venues while at the NSA until 1992, when she moved to New York City. One of her early TV appearances was Russell Simmons‘ Def Comedy Jam in the early 1990s, where she shared the stage with Adele Givens, J. B. Smoove, D. L. Hughley, Bernie Mac, & Bill Bellamy.[9] Working for the Hal Leonard publishing house, she edited a book entitled Polyrhythms – The Musician’s Guide, by Peter Magadini.[10] Her first big break came when opening for Chris Rock at Caroline’s Comedy Club.[9]

In 1997, she joined the writing team on The Chris Rock Show[11] and also made many appearances on the show. The writing team was nominated for four Emmys, and in 1999, won for Outstanding Writing for a Variety, Music, or Comedy Special. 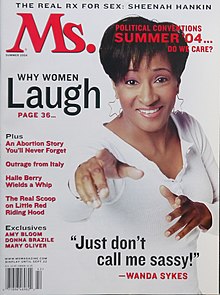 Since that time, she has appeared in such films as Pootie Tang[12] and on TV shows such as Curb Your Enthusiasm.[13] In 2003, she starred in her own short-lived Fox network sitcom, Wanda at Large.[14] The same year, Sykes appeared in an hour-long Comedy Central special, Tongue Untied. That network also ranked her No. 70 on its list of the 100 greatest all-time stand ups. She served as a correspondent for HBO‘s Inside the NFL,[15] hosted Comedy Central’s popular show Premium Blend, and voiced a recurring character named Gladys on Comedy Central’s puppet show Crank Yankers.[16] She also had a short-lived show on Comedy Central called Wanda Does It.[17]

In addition to her film and television work, she is also an author. She wrote Yeah, I Said It, a book of humorous observations on various topics, published in September 2004.[18]

In 2006, she landed a recurring role as Barb, opposite Julia Louis-Dreyfus, on the sitcom The New Adventures of Old Christine;[19] she became a series regular during the series’ third season in 2008. She also guest starred in the Will & Grace episode “Buy, Buy Baby” in 2006.[20] She provided voices for the 2006 films Over the Hedge,[21] Barnyard, and Brother Bear 2. She had a part in My Super Ex-Girlfriend and after playing in Evan Almighty, had a bit part in License to Wed. Sykes’ first HBO Comedy Special, entitled Wanda Sykes: Sick & Tired, premiered on October 14, 2006; it was nominated for a 2007 Emmy Award.[22] In 2008, she performed as part of Cyndi Lauper‘s True Colors Tour for LGBT rights.[23]

In October 2008, Wanda Sykes appeared in a television ad for the Think Before You Speak Campaign, an advertising campaign by GLSEN aimed at curbing homophobic slang in youth communities. In the 30-second spot, she uses humor to scold a teenager for saying “that’s so gay” when he really means “that is so bad”.[24][25]

In May 2009, Sykes was the featured entertainer for the annual White House Correspondents’ Association dinner, becoming both the first African American woman and the first openly LGBT person to get the role. Cedric the Entertainer had been the first African American to become the featured entertainer in 2005. At this event, Sykes made controversial headlines as she responded to conservative radio talk show host Rush Limbaugh‘s comments regarding President Barack Obama. Limbaugh, in reference to Obama’s presidential agenda, had said “I hope he fails”. In response, Sykes quipped: “I hope his [Limbaugh’s] kidneys fail, how ’bout that? Needs a little waterboarding, that’s what he needs.”[28]

Her second comedy special, Wanda Sykes: I’ma Be Me premiered on HBO in October 2009.[27] November 2009 saw the premier of The Wanda Sykes Show, which starts with a monologue and continues with a panel discussion in a similar format to Bill Maher‘s shows Real Time with Bill Maher and Politically Incorrect.

She appeared as Miss Hannigan in a professional theatre production of Annie at The Media Theatre in Media, PA, a suburb 25 minutes southwest of Philadelphia. Her first appearance in a musical, she played the role from November 23 – December 12, 2010, and again from January 12–23, 2011.[27] She voices the Witch in the Bubble Guppies episode “Bubble Puppy’s Fin-tastic Fairlytale Adventure”.

In 2012, Sykes played the role of Granny in Blue Sky Studios’ Ice Age: Continental Drift. In 2016, she returned to the role in Ice Age: Collision Course.

In May 2013, Sykes was a featured entertainer at Olivia Travel‘s 40th anniversary Music & Comedy Festival in Punta Cana, Dominican Republic.[29]

In 2013, Sykes appeared in eight episodes of Amazon’s Alpha House, a political comedy series written by Doonesbury creator Garry Trudeau.[30] Sykes plays Rosalyn DuPeche, a Democratic Senator from Illinois and the next door neighbor of four Republican senators living together in a house on Capitol Hill. Sykes also appeared in Season Two, which became available in October 2014. The series was canceled after the second season.

In 2018, it was announced that Sykes would be the head writer for the revived tenth season of Roseanne.[31] This attracted attention due to Roseanne’s far-right and conspiratorial views.[32] On May 29, 2018, Sykes announced on Twitter that she would no longer be working on the series after a since-deleted Twitter rant by Roseanne Barr about Valerie Jarrett.[33][34] 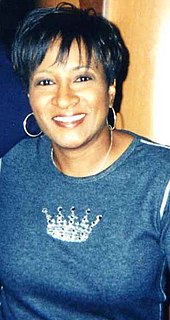 Sykes was married to record producer Dave Hall from 1991 to 1998.[9] In November 2008, she publicly came out as a lesbian while at a same-sex marriage rally in Las Vegas regarding Proposition 8.[9][35] A month earlier, Sykes married her wife Alex Niedbalski, a French woman,[36] whom she met in 2006. The couple also became parents in April 2009, when Alex gave birth to a pair of fraternal twins, a daughter and a son, named Olivia and Lucas.[37]

Sykes only came out to her conservative mother Marion and father Harry when she was 40, who both initially had difficulty accepting her homosexuality. They declined to attend her wedding with Alex, which led to a brief period of estrangement; they have since reconciled with Sykes.[38]

During a September 19, 2011, appearance on The Ellen DeGeneres Show, Sykes announced that she had been diagnosed earlier in the year with ductal carcinoma in situ (DCIS). Although DCIS is a non-invasive “stage zero breast cancer”, Sykes had elected to have a bilateral mastectomy in order to lower her chances of getting breast cancer.[39] Sykes splits time living in both, Media, Pennsylvania, a suburb of Philadelphia,[40] and her summer house in Cherry Grove, New York.[41][42]

Sykes publicly expressed being devastated when California voters passed state Proposition 8. She said: “with the legislation that they passed, I can’t sit by and just watch. I just can’t do it.”[43][44] She has continued to be active in same-sex marriage issues hosting events and emceeing fundraisers. She has also worked with PETA on promoting dog anti-chaining legislation in her home state.[45]

She has been an outspoken supporter of Detroit‘s Ruth Ellis Center after the organization’s staff sent Sykes a letter asking her to visit during her 2010 tour’s stop in Detroit.[46][47][48]

Sykes has been nominated for ten Primetime Emmys, with one win (in 1999) for “Outstanding Writing for a Variety, Music or Comedy Special”. In 2001, she won the American Comedy Award for “Outstanding Female Stand Up Comic”. She won a Comedy Central Commie Award for “Funniest TV Actress in 2003”.[49] In 2010 she won the GLAAD Stephen F. Kolzak Award.[50][51] In 2015 she won the Activism in the Arts honor at the Triumph Awards.[52]